I'm a fan of the Academy Awards; I'll admit it. I place absolutely no value in the films that win such things but I love the spectacle of the ceremony and I'm glad it's being done in some version of "in-person" this year. We can all use the break.

So today I'm not writing about my books, which I'm sure will come as a relief to anyone who's ever clicked on this blog before. I also won't bore you with yet another prediction of what's going to win the award for best picture (Nomadland) or any of the acting awards. They seem especially predictable this year anyway.

As I often do, I'll concentrate on a little-attended-to category, the best short films. (As a quick caveat, I am not including the short documentaries because my family and I did not watch those. Our experience has been that they are not so short.) I do this as a public service because the vast majority of people will head into Sunday night's telecast of the Oscars without having seen any of the nominated short films.

In the spirit of shortness (and being short myself I appreciate the quality), I'll give a brief description of each of the nominated live action and animated shorts, reveal my own personal bias for a winner and then predict which I think will take home the prize. 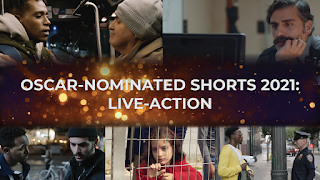 The Present: A Palestinian man and his young daughter have to endure the checkpoint and racism of Israeli soldiers to buy his wife a special anniversary present, and there's no certainty either of them will make it back alive.

Two Distant Strangers: A topical, funny, harrowing version of Groundhog Day in which a young Black man wakes up in a woman's apartment and in attempt after attempt to get home and feed his dog is confronted and killed by a racist white police officer.

Feeling Through: A young man trying to find a place to crash for the night is interrupted by an encounter with an older blind man and has to decide whether to jeopardize a roof over his head to help a stranger.

White Eye: An Israeli film about a man who finds the bicycle that was stolen from him and finds that trying to get it back could put another man's freedom at risk.

The Letter Room: A corrections officer (Oscar Isaac) is assigned to a desk job where he reads, censors and distributes letters to the inmates. He becomes involved in two of the prisoners' lives and tries to help.

If I were voting, I'd hope Two Distant Strangers would take the prize, if not just for its topicality than for its tone and inventiveness. Best guess for what will actually win: The Letter Room. 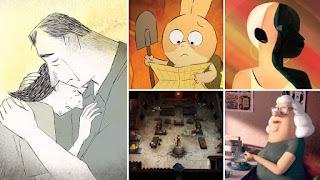 Burrow: The inevitable Pixar short, about a rabbit trying to find a place for a more comfortable burrow and being mortified by intruding on various neighbors.

If Anything Happens I Love You: Parents try to cope with an unspeakable tragedy.

Opera: A "one-take" metaphorical film about human society in general which really needs a big screen to do it justice.

Yes People: A group of people living in an apartment building go through a day facing various difficulties and in some cases being silly.

Genius Loci: Maybe the most French film ever made. A woman, possibly with some type of mental illness, experiences the whole of urban life around her in strange, metaphorical ways. Lots of smoking.

To be frank, Burrow might be the most adorable thing I've ever seen and I would vote for it. Best guess to win: If Anything Happens I Love You because it is infinitely more depressing and the Academy loves that.

I promise not to edit this post after Sunday night. It's entirely possible I'm wrong.