Okay, here's the deal. The mass-market-size book club version of EDITED OUT, the second Mysterious Detective Mystery, has just been published, and as usual, I have been sent far too many copies. So I'm willing to give away 10 of them. But that's too easy, so here's how it'll go:
Let's have an internet scavenger hunt! Go online and find answers to the following questions:
1. Who is E.J. Copperman?
2. Which Marx brother invented a watch that measured its user's blood pressure?
3. Who is Aaron Tucker (as related to E.J. Copperman)?
4. Who is scheduled to be the guest of honor at Malice Domestic in 2020?
5. What is The Meaning of Life? (Trick question.)
Send your answers to ejcopperman [at] gmail [dot] com by Friday, Dec. 20 at let's say 10 p.m. EST. Do NOT post them here (or anywhere else). First 10 with all the correct answers will win a free copy!
Only those from the U.S. and Canada, please. The postage gets totally out of hand.
If you've gotten a free book from me in the past two years, please don't apply. Let's give some new people a chance, okay? I still love you. 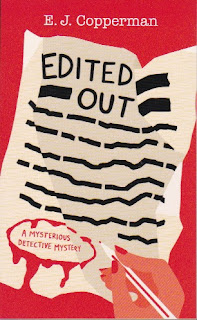 I'm cleaning house. Literally. And in doing so, I've come across some old ARCs (uncorrected proofs) of a few books. Now, since I'm cleaning house (literally) and want to free up some shelf space, I'm offering you a look at these, and I'm not going to charge you ANYTHING for the book.

On the other hand, I will need for $3 via PayPal for postage. That's not much to ask, is it?

Readers in the U.S. only, please, because otherwise the postage would be WAY more than $3.  So here's what we have:

These are not the exact books you'd get if you bought a published copy. There might be typos and errors, and some minor changes might have been made along the line. But hey, it's free (except for the $3)!

It was May 24. Never think I don't remember.

Less than two weeks ago I passed the milestone I'd been told was significant. It's not that I didn't notice but I was busy that day so I didn't actually mark the date in any particular fashion. But I did remember and I did think about it.

May 24 was two years since I had my last chemotherapy treatment.

My Hodgkin's lymphoma is officially in remission and from all accounts is expected to stay that way. But the effects of it linger, almost entirely in my mind rather than my body. (There is still a very small nodule under my jaw that will probably always be there but is not a danger as long as it doesn't decide to grow again.)

They don't talk to you that much about how cancer affects you emotionally. I mean, they do if you go to the support meetings and the educational seminars and all that, but when you're going through chemo you're not really inclined to do anything that requires, you know, movement. And when you're through you want to put the whole experience in the rearview mirror as quickly and completely as possible. So I didn't go to any of those things and figured I'd just move ahead.

I did, but it's not that simple.

Most of what lingers is the anticipation of a relapse, the "waiting for the other shoe to drop." I wake up many mornings with a vague sense of dread, and there's nothing to dread that I know about. Then I realize I'm wondering if there'll be a reason for me to be worried again. Now, rest assured I've been told there is none; the kind of cancer I had responds very well to the treatment I had, does not serve as a harbinger for other forms, and once it's in remission tends to stay that way about 95% of the time. So this isn't a cognitive, rational anxiety. But it's still there.

It's not cancer I'm afraid of, although there are certainly many forms of it more potent and dangerous than the one I had. It's the feeling of helplessness and the treatment that I'm worried about repeating. When FDR said we had nothing to fear but fear itself he wasn't talking about cancer, but he nailed it right on the head. I fear the fear.

But that's not what May 24 is about. It's about marking the time that has passed since the fear. It's about noting that I got through what I had to get through. I cherish the fact that I'm still here and that my life didn't get cut short or suffer some horrible transformation.

For all intents and purposes, compared to other cancer patients I had it easy. I went for five chemotherapy treatments spaced every six weeks, then a year and a half (give or take) of immunotherapy once every two months. Yes, my hair fell out and I was drowsy most of the time. Sure, my fingers and toes went through neuropathy and I had that chemo taste in my mouth for months. If the worst thing you can say about chemo is that you couldn't play guitar for six months, you had a pretty soft time of it.

And guess what -- the hair grew back (for the most part). The fingers and toes still have a slight tingle every now and again, but they can do everything they did before. My taste buds, alas, work just as well as they ever did. I'm the only cancer patient in history to have gained weight in the process. I need to start doing something about that, and I will.

The process is about regeneration. It's about going through what you have to go through and then noting it, appreciating the situation, and not forgetting. May 24 is about the end of something and the beginning of something else. My current life is pretty damn good. That I had a bad year (more or less) in 2017 is the price of doing business. I'll take it.

I still have to go in for PET scans about every six months just to check. Nobody thinks there'll be a problem, but the next one is scheduled for July, I think. I'll go and be anxious for a day or two and then I'll go about my life again. Maybe I'll even exercise. Because being in remission doesn't give you a pass on everything else.

Kings River Life Magazine has named its Best Books of 2018, and I'm very flattered to have one of them named here: 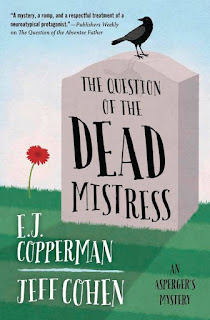 If you're an Agatha voter or a Lefty voter, please take note! 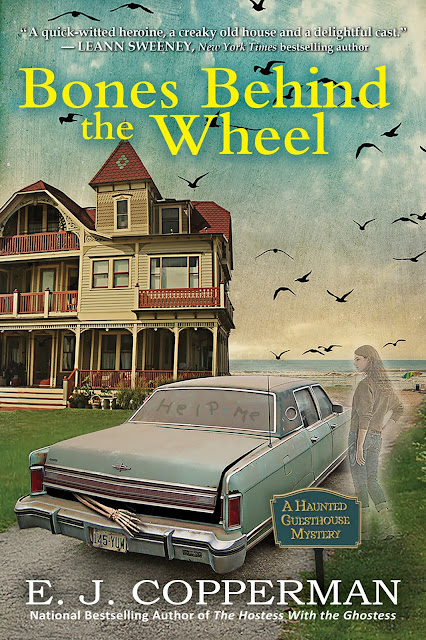 Alison's not looking for a mystery to solve. So one comes looking for her: Excavation behind the guesthouse uncovers a vintage Lincoln Continental, which is odd enough. But when a human skeleton is found behind the driver's seat... it's time for Paul, Maxie and the gang to get back into gear. But Alison refuses to participate - until her new husband Josh finds the whole thing fascinating and starts to investigate!
Posted by E.J. Copperman at 8:03 PM 1 comment:

E.J. Copperman
Author of the Haunted Guesthouse Mystery series, co-author (with Jeff Cohen) of the Asperger's Mystery series and soon to be author of the Agent to the Paws series! Hardest working writer in the mystery game? You be the judge.