That assumes, of course, that you've been waiting. I know I'VE been waiting, but that's another discussion entirely.

In any event, the fact is that INHERIT THE SHOES, the first Jersey Girl Legal Mystery (and yes, there will be more) is now available no matter where you live, assuming they speak English there. And I'm pleased to say that those who have read it seem to like it pretty well. I'm proud of it but then I like all my books or I wouldn't have written them, so there's that.

INHERIT THE SHOES tells the story of Sandy Moss, a New Jersey assistant county prosecutor (we don't have District Attorneys here) who decides she's had enough of the putting-people-in-jail thing and decides to move to Los Angeles, where a tony law firm that specializes in family law (mostly divorces) has offered her a job.

On her first case, a divorce between an actor who plays a lawyer on TV - and wants to study Sandy to gather "authenticity" - and a singer whose star has dimmed a bit, Sandy almost torpedoes her brand new career by speaking up when her boss has told her to... not do that.

But it's not long before her previous experience is being called into play, because her client (the actor) is accused of murdering his soon-to-be-ex-wife - with a bow and arrow from the John Wayne classic The Searchers.

And that's all I'm going to tell you about the plot.

The book includes characters you're going to like (I promise) and has lots of action and a good number of laughs. Possibly a little romance is sprinkled in there, but I'm not saying.

You can read the reviews here and find out where to buy a copy here, but I think you'll enjoy INHERIT THE SHOES if you've liked any of my previous books. But then, I might be just a little biased. 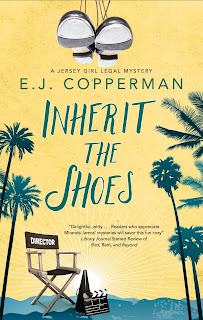