Coming THIS SATURDAY, MAY 9!

ABSENCE OF MALICE will bring 17 of your favorite crime fiction writers (including, modestly, yours truly) into your living room, your bedroom, whatever room you like and have a device attached to wifi and you'll get the GOOD stories.

And what an All-Star lineup!:

ABSENCE OF MALICE is going to be a ton of fun! You don't want to miss it! 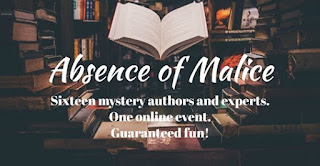 Okay, we're all hunkered down in our homes right now and for those unaccustomed to such things this might be a considerable shock to the system. The same (fill in number) walls, the same people (or lack thereof), the same activity no matter what day of the week it might be. Some of you might be working at home for the first time. Others might not be working at all.

You can only stress bake so much and Doordash is nice to keep local restaurants viable, but you can't do it every day. Grocery delivery services are booking up weeks in advance. And the worst part, except for those who are infected or know someone who is and might be in some danger, is that we have no idea how long this is all going to last.

Well, settle in, kids. I've been doing this work-at-home thing since 1985 and I can tell you a few things about it.

First: You're going to gain weight. I was pretty slim when I started freelancing from my apartment in Wallington, New Jersey 35 years ago. Of course, I was also 28 years old and had a metabolism, but that's not the point. The lack of moving around definitely contributed to making me the person I am today, who is roughly 40 pounds heavier and not happy about it.

So find yourself an online workout (or 1300) that fits your needs and set aside some time every day to do it. Really. I have been working out with Coach Kozak and Claudia at HasFit since December and have now started to sprinkle in some sessions with the good British people at the Body Project. Those work for me. My spouse has been doing yoga and fitness walking found online. In the interest of full disclosure, I haven't noticed a significant weight loss but I haven't gained anything despite eating like a moose since the stay-at-home order was issued here a little under a month ago.

Second: Don't turn on the TV during the day. It's a vortex from which you might never emerge, and let's face it, nothing good ever happened on daytime TV. If you're working, try to keep your schedule from back when the world was pretending to be normal. If you're not, read books (I can suggest some titles if you like). Cook meals for later in the week. Troll grocery delivery sites until a slot opens up. Listen to music.

Third: The one thing that this crisis has produced is a tsunami of streaming entertainment. Some services are offering free performances and screenings of recorded shows. Artists are performing from their homes because going on the road (in many cases the main source of revenue for musicians) is not possible. You can "tip" if you like but you often don't have to. I have been checking in for a Sunday double feature every week: Circe Link and Christian Nesmith on Facebook (at Christian's page) at 6 p.m. EDT and then quickly switching to Susan Werner at 7 p.m. EDT, also on Facebook. There are many, many others. If you have a favorite I'd like to hear about it.

Fourth: If you're working, work every day. Okay, take weekends off like always, but don't just slough off a day because you're not into it. Keep doing as much of your daily routine as you can from your house. I've been writing a book that I probably didn't have to start for another two months because I want to keep the 1000-word-a-day habit alive. It's too easy to let one slip turn into an indefinite slide. Don't do that.

Fifth: Hobbies. Aside from my newest obsession, which is washing my hands, I've taken up the most cliched time consumer of them all, jigsaw puzzles. Given that I already have a pretty serious crossword puzzle habit, that's a lot of puzzles. It occupies the mind and distracts from the grimmer aspects of reality for a time. Which is what baseball used to do for me. Here's hoping that'll return at some point (my guess is July).

Sixth: It's good that social media had been up and thriving before this pandemic hit. Staying in touch with friends and family would have been torture without it and we'd be feeling even more isolated. So keep up with your loved ones and check in with ol' E.J. once in a while because I like to hear from people, too. (And how did Zoom become the go-to networking tool? What happened to Skype?)

More than anything, do all you can to stay safe. Wash those hands, and then wash them again. Wash anything that is brought to your house. Use wipes (if you have them) or some sort of cleaning product on common areas (doorknobs, light switches, a computer mouse, keyboard and cell phone) every day. Stay six feet away from all people who don't live in the same house as you.

And hang in there. I can't afford to lose any readers. 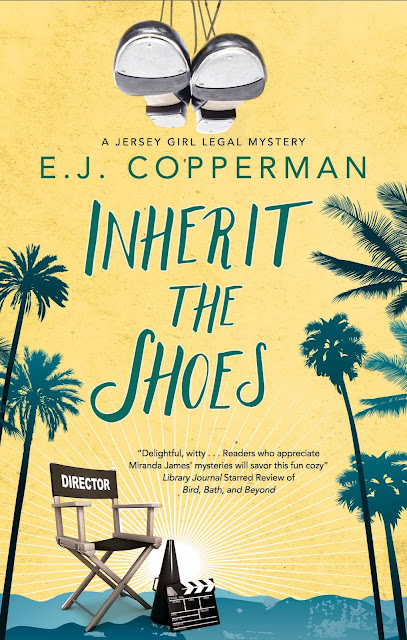 From today's (January 13) Publishers Marketplace: Jeff Cohen writing as EJ Copperman's INHERIT THE SHOES, the first in a new series about a young female lawyer in Los Angeles who teams with an actor who plays a lawyer on television to solve murders he might have committed, to Kate Lyall-Grant at Severn House, with Rachel Slatter editing, in a two-book deal, for publication in fall 2020, by Josh Getzler at HG Literary (world English).

The book will publish first in the U.K. in the fall, and three months (or so) later in North America. Don't worry; I'll make SURE to update you as things progress, but I'm really anxious for you to meet Sandy Moss this year!
Posted by E.J. Copperman at 2:10 PM No comments:

E.J. Copperman
Author of the Haunted Guesthouse Mystery series, co-author (with Jeff Cohen) of the Asperger's Mystery series and the Agent to the Paws series! Soon to be the author of the Jersey Girl Legal Mystery series. Hardest working writer in the mystery game? You be the judge.