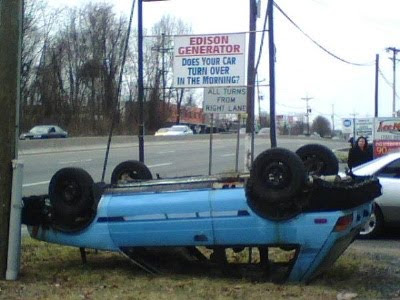 How can you not love this?
Posted by E.J. Copperman at 9:10 AM No comments: 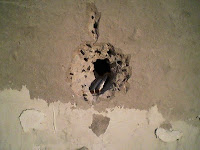 The reviews and comments about NIGHT OF THE LIVING DEED have been very kind and quite positive. But, being the kind of person I am, I tend to fixate on the one negative comment in an otherwise glowing treatise on my work. If someone likes 324 pages of my book, and has a slight problem with one, I'll go right to the one offending page and rend my garment over what I might have been thinking when I was foolish enough to commit it to hard drive space.
So naturally, when more than one person takes me to task over a detail, I take notice.
Now as you know, NIGHT OF THE LIVING DEED is the story of Alison Kerby, who buys herself a very large, reasonably old Victorian on the Jersey Shore (no reality show intended) and renovates it to become a guesthouse. Along the way, she discovers the place is haunted by two pretty recently deceased ghosts, and after some argument, must investigate their deaths.
All well and good. So far, not one reviewer has commented that the book is poorly written, that the story doesn't hold one's attention, or that the characters are unlikable. They accept the idea of ghosts communicating directly with the living, they don't mind that Alison's nine-year-old daughter is brought into the action, and they have no problem believing that half the town council in a New Jersey town might have committed murder over a real estate opportunity. They don't even mind my invoking the name of George Washington himself in the proceedings just to up the name-dropping quotient.
Nope. What they're after me about is the plaster.
See, in the first chapter, one of the ghosts creates a very large hole in one of the walls in Alison's new (well, old, really) house. And although Alison is very adept at home improvement, and has a professional contractor as a mentor, she is daunted by the prospect of having to repair said hole, given that plastering is, according to Alison and her contractor friend, "a lost art" that has been replaced with Sheetrock and time savers, and even though they try to repair the gaping break in the wall, neither of them is ever very optimistic about the outcome.
Well, I'm hearing it now from those who insist that plastering as an art is very much alive and well, that the contractor especially should know how to do it, and that this story point has pulled this reader utterly and completely out of the story.
Now, let's recap: Ghosts. Levitation. Murder as a real estate ploy. Nine-year-olds helping to investigate murders. GHOSTS.
No, it's the plaster that's killing the reality here.
Okay, I admit it--I specifically didn't do as much research here as I could have, because I didn't WANT Alison or Tony (the contractor) to know how to fix the wall. I wanted it to be a running gag throughout the book, and for it to pay off at the end. And as the owner of a 100-year-old New Jersey house with plaster walls, I can tell you that it sure as heck is daunting to ME when one of them is cracked or broken.
But it's fiction. That's the idea. I can't tell you what to believe and what not to believe. I can't predict ahead of time what's going to be that sore thumb that sticks out for each individual reader. And I know that some details are going to bother people to the point that it spoils the experience of reading the book for them. I'm sorry about that. I wish it were different.
Still, if you're buying the ghosts...
Posted by E.J. Copperman at 10:24 AM 2 comments:

Stranger In A Strange Land

What do you suppose they're trying to tell us New Jerseyans with this sign? 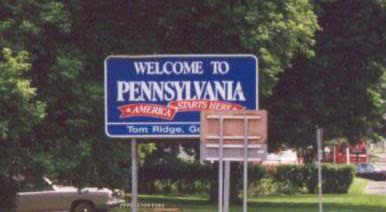 What country is it I'M living in?

A preliminary (okay, VERY preliminary) look at the cover of AN UNINVITED GHOST, with no guarantees it won't be changed. Opinions?
Posted by E.J. Copperman at 1:30 PM 14 comments:

Yes, I KNOW that NIGHT OF THE LIVING DEED isn't available for the Kindle yet. I share your frustration. All I can tell you (because it's all I know) is that I'm told it will be soon. You may define "soon" in any way you prefer.
Meanwhile, back here at the ranch (we don't really have that many ranches in New Jersey), all the initial reports are that DEED is reaching people, and they seem to like it. This is a new experience for me, and it's very, very gratifying. Thanks to all who have shared their comments about the book, or have emailed with their opinions. I'm grateful to each and every one of you.
This, of course, does not for a second mean that I'm letting up on the shameless promotion or the asking you to tell EVERYONE YOU KNOW about NIGHT OF THE LIVING DEED. You're on the hook with me, here (not really, but that's one of those motivational tactics you're always hearing about). So get out there and scream it from the rooftops--but stay safe, and shout from the INSIDE of the house.
I realize this blog so far has been very book-centric so far, and that's not my intention for the future, so if there's anything you'd like to hear about, don't be shy--leave comments! I do check, you know!
Posted by E.J. Copperman at 3:16 PM 3 comments: