No. There aren't going to be more Haunted Guesthouse books.

Readers ask questions, and that's great. There's nothing writers love quite so much as talking about themselves and their work.

But I do cringe just a little when I get the most frequent question from a reader, and it's because I don't have an answer that's going to make them happy. They want to know if there will be more books in the Haunted Guesthouse mystery series, and I have to tell them no.

Authors most often don't decide when to end a series. I have never voluntarily ended a series since I finished the Aaron Tucker books in 2005. And that wasn't so much because I wanted the series to end as that I had a better deal with another publisher.

So no, it's not my choice that the most popular of my book series will not continue. Believe me, we tried, to the point of actually selling the last two Guesthouse books to a new publisher when the first one decided not to ask for any more. Then those two books didn't supply the kind of sales numbers the new publisher required, and well, you're not going to move a series more than once, if you manage it that many times. (Still, you might get another quick glimpse of Alison and the gang, not in a new book, and when I know for sure I'll be certain to pass the news along.)

Alison Kerby and her nutty group of confederates will have to satisfy themselves with ten novels and two novellas (only on audiobook). And you and I will have to do the same, I'm afraid.

The same is true of Duffy Madison and Kay Powell, who inhabited the Mysterious Detective and Agent to the Paws series, respectively. Each of them got two novels and that was it. This is the reality of the publishing business. If enough people buy the books, there are more and if not... well, I can only assume I didn't do as good a job as I should have.

That's the way it goes.

(And if you're one of the people wondering whether the next Mysterious Detective book would have solved the mystery of Duffy Madison, I can tell you with no hesitation that it would not, because I never decided whether he was real or not.)

Within a month (specifically, by November 1, when AND JUSTICE FOR MALL hits bookstores and libraries) there will be four Jersey Girl Legal mysteries in print, and the fifth will be available in 2023. Also next year will come UKULELE OF DEATH, the first in what we all hope will be a series about Fran and Ken Stein, and if you want to know about them, read their names together and you might get an idea. More on that after New Year's.

So let's not dwell on the past. The Guesthouse books and all the others still exist. You can read them whenever you like. And I'm not finished writing yet, so hopefully there will be more on the horizon. And if we run into each other somewhere along the line and you feel compelled to ask, I'll be happy to answer you question.

But I'm afraid the answer will not have changed.

Why You Won't See Guns on My Books Anymore

Just to be clear: The following does NOT apply to the next Jersey Girl Legal Mystery, AND JUSTICE FOR MALL, which will be published this fall with a cover that was approved early this year.

Earlier this month I sent an email to the wonderful Rachel Slatter, my editor at Severn House, asking about upcoming covers on (at least) two books the company will publish from me in 2023. One will be the fifth Jersey Girl book, and the other... that's a subject for an upcoming post. And we'll see after that.

After having given it considerable thought, I asked Rachel if we could keep the image of any guns off the covers of my books from this point on. Part of this came from my noticing the handgun on the spine (!) of WITNESS FOR THE PERSECUTION, the most recent Jersey Girl book. And my realizing that until now I hadn't even registered that it was there. That was how ubiquitous that image had become.

I don't intend to turn this post into a political statement, but it is necessary to understand that I am an advocate of much stricter gun laws that the US has at this moment, even with the tweaks that passed through the Senate recently. I thought things would change after tiny children were shot down randomly at Sandy Hook, but that was 10 years ago and the situation, if you've been paying attention at all, has simply gotten worse.

This post is not meant to change anyone's mind on what the Second Amendment does or does not guarantee, or on what should be done about a country of 330-million people with 393.3-million guns. That's your own business and each of us reacts the way we see fit. This is how I did it.

I worry that, writing crime fiction, I have allowed myself to fall back on firearms as an easy way to get the story moving and to get my characters into danger. The antagonist pulls a gun and the stakes are raised. Easy.

It shouldn't be that easy. I should have to work harder.

Now, I'm not promising that you'll never see a firearm show up as a plot point in one of my books again. To some extent, removing them entirely would be unrealistic in the society where these novels take place. I will try to limit any discussion of guns to a minimum and try harder when getting my characters into trouble. That's on me.

But I do worry about glamorizing guns, and to some extent about taking their danger away. Readers just accept that a bad guy - and quite a few good guys - will have a gun. A lot of crime fiction writers go to great lengths to research those firearms and make sure they're being used (and described, often in great detail) correctly. I tend not to be quite so precise, partially because I am not an expert on the subject but also because I don't want to be.

Normalizing the use of firearms has gotten us to this point. I don't blame popular culture for mass shootings in schools but I think the mindset of a person who might consider such an act is influenced to at least a small degree by the fantasies put up on movie theater screens, television and, yes, in the pages of books.

I prefer not to have that image be the face of my work. And the good people at Severn have indulged me on that point.

Again, I can't promise that I won't ever fall back on the device, but I will try to minimize it. And the first step is taking it off the cover.

I don't think it will solve a thing, but it's what I can do, so I'm doing it. 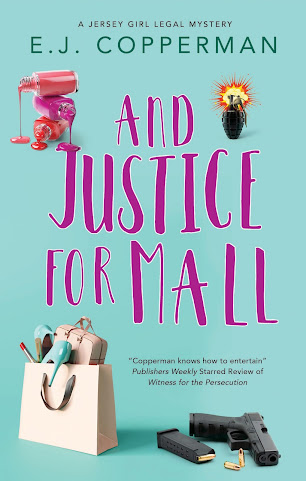 Sandy Moss is back, with a client who won't leave her alone! Eleven-year-old Riley wants Sandy to get her father out of jail. But her dad is already convicted--of murdering Riley's mom. And he swears he's guilty.
Posted by E.J. Copperman at 7:35 AM No comments:

Late Cover Reveal (Now on sale in the UK!) 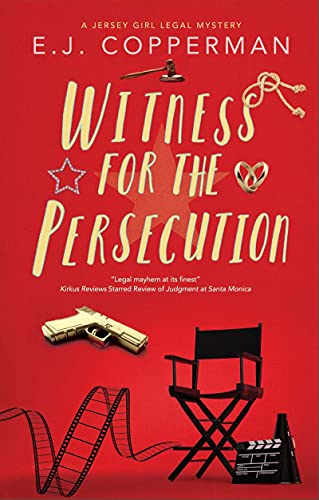