Sorry I haven't updated in so long. I always assume you guys will be annoyed if I bust into your life without any news to report.

Suffice it to say life has been interesting here at the farm (those who know me will understand how absurd that sentence was): We're gearing up for a raucous fall and winter, with an appearance at Bouchercon--among the roughly 5,000 other authors attending--at a panel called OLD FRIENDS, NEW FRIENDS which will examine the trials and tribulations of writing more than one series and keeping it all straight in your head. More on that coming soon.

After the trip to Cleveland (the land of cleve), we'll be waiting for the release of the eSpecial novella A WILD GHOST CHASE, told from Paul Harrison's point of view and bringing a few surprises along the way. Look for that on New Year's Eve (everyone's favorite night to stay in and read). I'll supply a few links below.

The fourth Haunted Guesthouse novel, CHANCE OF A GHOST, will be published early in February, and hopefully you'll find it worth the wait. It involves Alison in the death of a gentleman who lived in her mother's active adult community--who claims (he's now a ghost) that he was murdered by electrocution in his bathtub. But Alison's mind is really on her ghostly father, whom her mother reports is missing--and about whose death questions start to arise.

There'll be more coming about both of those in the coming weeks. Thanks for being patient with me; I promise not to drop out of site (get it?) for so long again.

and here for the Barnes & Noble Nook. Preorders are available, and it's priced at only $2.99!

And... if you'd like a look at the cover of A WILD GHOST CHASE, well: 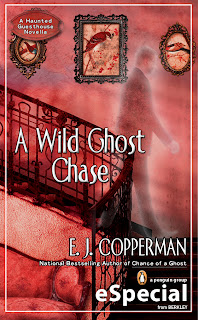