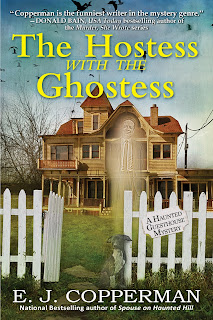 So here it is: The ninth Haunted Guesthouse mystery, THE HOSTESS WITH THE GHOSTESS (no, I don't know what it means either) is now available at bookstores and online! I couldn't be more excited--okay, maybe I could be a little more excited, but it would take something pretty big--and I'm hoping you feel the same way.

This is the first Haunted Guesthouse novel published by Crooked Lane Books, which also brings you my Mysterious Detective books, and yes, it is a hardcover book. I'll admit, I liked being able to offer you these stories for less than $8, but hardcover makes it feel more book-y, and it does offer larger print for those who appreciate the boost in picas.

But here's the thing, friends: This series, which seems to be the most popular of those I've written, has come to Crooked Lane and I'd like to see it stays there. I don't want to stop writing the Guesthouse books because so many of you have told me you like them. So I'm a little nervous about this release because it's a hardcover book, an unfamiliar format for Alison and her pals.

I'm hoping you'll follow us in the direction we're going. But we won't know for a while. Sales, in a realistic publishing business, drive series. The more books that you buy, the better the chances the series will continue. Yeah, that sounds a little passive aggressive and I apologize for that, but it is true. We need to sell this title so there can be more. Please, tell your friends. Give them as gifts (I know, the holiday season is over, but gifts are always nice). Buy one for yourself. Ask your local library to order THE HOSTESS WITH THE GHOSTESS. I'll appreciate it greatly and I'll keep doing all I can to give you fun, intriguing stories.

In THE HOSTESS WITH THE GHOSTESS, newly-remarried Alison Kerby is settling into what is her new normal: Paul Harrison is out traveling the world, Maxie Malone is still at the guesthouse with her new husband Everett, Alison's daughter Melissa is now a teenager and her second husband Josh is settling into life in a house where he knows there are inhabitants he can't see or hear. That's what passes for normal in a haunted guesthouse on the Jersey Shore.

But things are never calm for long here: Paul's brother Richard, freshly deceased, shows up as a ghost in search of his detective brother. Richard Harrison was a criminal defense attorney involved in the case of a young woman accused of murdering her stepfather. He thinks he was close to proving she didn't do the killing--and that's why he was murdered himself.

Richard wants Paul to investigate the case, but Paul is nowhere to be found and oddly didn't leave a forwarding address. So before Alison can help Richard prove his client is innocent (and against Richard's wishes, to solve his murder) she has to find her friend. Which begs the question: How do you find a ghost when you want to?

All the characters you like will be involved and there are a few new ones I'm hoping you'll enjoy as well. The last thing I want to do is repeat myself, so there might just be a few surprises along the way...

Crooked Lane is very aware of what you liked about the previous Guesthouse books, so the only changes that have been made were made by me, for the sake of a better story and to provide some fun for readers. I'm hoping you'll enjoy THE HOSTESS WITH THE GHOSTESS and comment here to let me know! Feedback is so important to this writer--I like to hear which parts of the story you especially liked (and will pay attention to the parts you didn't) and to hear (or read) your reactions. Feel free to get in touch--I love to hear from you!

In the meantime, I can't thank you guys enough. You've been so supportive of all the books and perhaps the Guesthouse series most of all. You're the reason we've gotten to Book #9. And that touches me in a very real and wonderful way. You're the best. Thanks so much.
Posted by E.J. Copperman at 8:33 PM